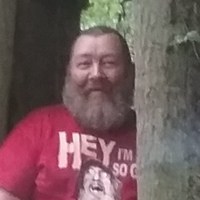 David A. Pearson, age 65, of Edgerton, Ohio, passed away at 7:38 P.M. on Tuesday, April 5, 2022, at his home, surrounded by his loving family, after an extended illness. David worked in maintenance at Edgerton Forge for 40 years. David attended Life Changing Church and was a member of the Lost Dutchman Mining Association and Weekenders Gold Club. He enjoyed metal detecting, fishing, hunting, gold panning, hunting mushrooms, gardening and painting. Above all, David was a family man. His children and especially his grandchildren were his world. He was the best dad, grandpa and uncle anyone could ask for.

Visitation will be held on Tuesday, April 12, 2022, from 10:00 A.M.-12:00 P.M. in the Krill Funeral Home, 860 West Mulberry Street, Bryan. Funeral services will follow at 12:00 P.M. with Pastors Marian and Tim Buntain officiating. Interment will take place in Shiffler Cemetery at a later date.

Memorial contributions may be given to Cancer Assistance for Williams County.

To send a flower arrangement or to plant trees in memory of David A. Pearson, please click here to visit our Sympathy Store.