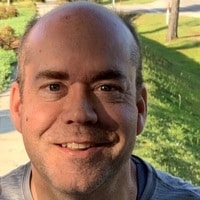 Franklin C. Lanius, age 53, of Bryan, Ohio, passed away at 2:30 A.M. on Sunday, May 30, 2021, at Community Health Professionals Inpatient Hospice Center near Defiance, Ohio. Frank was a copier service technician for 30 years, the last 15 years with Perry Pro Tech. Frank graduated from the Ohio State Patrol Academy and served with the Ohio State Patrol for a time. He was a member of Trinity Lutheran Church and was active in their Bed Brigade and softball team. Frank enjoyed fishing and the outdoors.

Franklin C. Lanius was born on February 27, 1968, in Bryan, Ohio, the son of Doyle F. and Esther L. (Foust) Lanius. He was a graduate of Bryan High School and Four County Career Center. Frank married Pam R. Gyurnek on October 5, 1996, in Bryan, and she survives.

Surviving in addition to his wife are his children, Alyssa Dean, of Dayton, Ohio, and Danny (Chelsea Stollar) Humbarger, of Columbia, South Carolina; his sisters, Diana (Rodney) Missler and Lana Kelly, both of Bryan; and several nieces and nephews. He was preceded in death by his parents.

Memorials are requested to Cancer Assistance of Williams County.