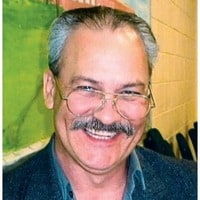 Donald Robert Koralewski, 63, of Bryan, Ohio, peacefully departed this earthly plain on Friday evening, Dec. 11, 2020, at home, his family at his side, for one more befitting of his good nature after a hard-fought battle with cancer.
A native of Toledo, Don exemplified the true meaning of love, commitment and duty to all those who knew him, through care given to his soulmate and wife of 23 years, Nelda. For 16 years he willingly put much of his life on hold to tend to her as she suffered from health issues that confined her to bed until her passing Dec 19, 2019.
After graduating from Woodward High School in 1975, Don studied fine arts photography at Ohio University, eventually earning a bachelor’s degree in broadcast communications from the University of Toledo before joining the Navy in 1979. Don spent nearly a decade on active duty in the U.S. Navy in the 1970s and ‘80s. He attended recruit training at the Great Lakes Naval Training Center followed by photographic training at the U.S. Naval Schools of Photography in Pensacola, Fla. His first duty station was the  Naval Photographic Center in Washington, D.C. While there, he qualified as a Naval Aircrewman [cq], earning the distinctive aircrew wings of gold, qualifying him to photograph from nearly all types of Naval aircraft. He subsequently was selected by portfolio review to attend the prestigious, year-long Military Photojournalism Program at Syracuse University during the 1982-83 school year. Following graduation and designation as a Navy Photojournalist, he became a writer as well as a photographer spending two years at the Navy Public Affairs Center in Norfolk, Va. Don finished his active career as the only photojournalist on the 6th Fleet Staff, which was then assigned to the destroyer tender Puget Sound and home-ported in Gaeta, Italy. In 1986, Don was sent to the aircraft carrier America during the 1986 Operation El Dorado Canyon, documenting the Navy’s part in launching airstrikes against Libya in retaliation for the terrorist bombing of a West Berlin discotheque. He was honorably discharged in 1988, having achieved the rank of Petty Officer 2nd Class. Don returned to the Navy as a reservist in 2000, serving two years in a drilling status, again with the Navy Public Affairs Center’s reserve unit.
After leaving the Navy, Don dedicated much of his life and career to small-town journalism. The work was deeply personal to him and he considered it a lifeline for the nation’s small communities. He believed the coverage these small town newspapers provided to what he viewed as underserved populations as critical, giving his readers an understanding of their place in their county, state and nation as a whole.
Over the past 30-plus years as a journalist, Don worked as a reporter, writer, photographer and editor at small community newspapers in Virginia and Ohio, also working several years as a public affairs specialist and web master with the University of Toledo. Over the last 15 years he held positions as managing editor at The Tidewater News, Franklin, Va.; and as managing editor/general manager at the Independent-Messenger, Emporia, Va., and the Sussex-Surry Dispatch, Wakefield, Va. He returned to Ohio in September 2016 as editor of The Bryan Times.

Throughout his career he won several awards for news and editorial writing and photography from the Virginia Press Association and the Ohio Press Association, most recently in 2018 when The Bryan Times staff won first place, Best Public Service Reporting, from the Ohio Press Association for its coverage of the Michindoh Acquifer issue. Don was known by his editorial team as one to always consider the impact of a given story on the individual before moving forward, ever conscientious in a world that can sometimes encourage the alternative. His sense of commitment, duty and integrity grounded him in his work and relationships with others. As his reporters frequently said, “He always had our back.”
In his free time, Don enjoyed engaging in philosophical and political conversations with whomever had the time. He was a self-taught mechanic and home improvement craftsman, and enjoyed restoring anything old to make it new again, whether cars or houses. He always said, “You can learn to fix anything from a book.”

Don is survived by his sisters Karen Carr, Donna Hatch, Darlene Spradlin and Angela Arvanitis, and by his step-daughter, Kelly Sweet. He was preceded in death by his wife, Nelda; his father, Casmire D. Koralewski, and his mother, Mary Jane Shade.