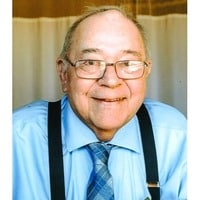 Thomas D. Knecht, age 81, of Edgerton, Ohio, passed away at 4:10 P.M. on Thursday, December 24, 2020, at Park View Nursing Center in Edgerton, surrounded by his family, after an illness of one year. Mr. Knecht was a 1957 graduate of Edgerton High School and graduated from Tri-State College with an associate draftsman degree. He was veteran of the United States Army, serving from 1962-1964, with one year in Korea. He was employed by The Aro Corporation in Bryan as an engineer from 1957 until 1984 and then was employed by Allied Moulded in Bryan from 1984 till his retirement in 2007. Tom was a member of St. John Lutheran Church near Stryker, Ohio, and John D. Smith Post #10 of the American Legion in Edgerton and played with Curly’s Country Grass band for forty years. He enjoyed making things in his work shop, especially Christmas items, was an avid golfer and fisherman, and loved to travel in his retirement. He also enjoyed attending all his grandchildren’s activities, whether in Edgerton or Columbus, and was a lifelong fan of the Edgerton Bulldogs, Ohio State Buckeyes and Detroit Tigers.

Survivors included one son, Robert (Denise) Knecht, of Edgerton; one daughter, Linda (Thomas) Ryan, of Westerville, Ohio; five grandsons, Bronson, Preston (Laurel) and Carter Knecht and Jacob and Zachary Ryan; and a brother-in-law, Lee Gilbert, of Edgerton. He was preceded in death by his parents and one sister, Elizabeth Gilbert.